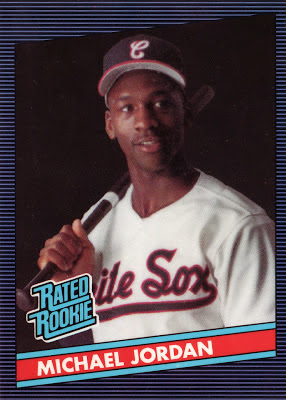 Years ago I wrote about the faux 1986 Topps Jordan card in which his basketball statistics are converted into baseball statistics (!!!). Also on that card, his hat is falling off as he is taking batting practice and he is making a weird face like he’s playing baseball for the first time in 20 years while also having sex. I have yet to determine why 1986 became the year of choice for Michael Jordan baseball cards since it was not his rookie year, or the year he decided to play baseball, or of any significance, really, in his career up to that point except that it was the only year he was ever injured. The random year chosen for his baseball cards only serves to reaffirm my suspicions that Michael Jordan playing baseball never really happened and it was all a dream, and you are dreaming now. Don't wake up though, I'm not finished.

In the interest of producing more 1986 Michael Jordan baseball cards for an insatiable nation, Donruss stepped up to the challenge. And by Donruss I mean “Fun City Cards.” 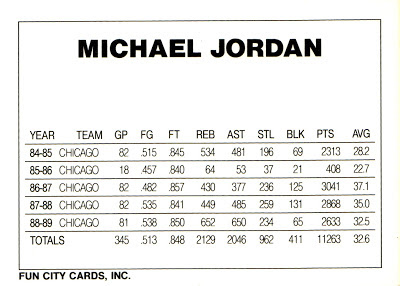 Fun City boss: BOLD IT CAPS IT THIS IS FUN CITY NOT BORING CARD TOWN!

You would think a card from a “company” called Fun City Cards would have a lot of zany, distracting stuff, like pictures of cartoon elephants dunking basketballs while hitting baseballs with their trunks and riding skateboards or something. I don’t know—that was just an image that came to mind. Or maybe some balloons? Or at least some color. I love the irony of it all, is what I'm trying to say.


It should also be mentioned that Michael Jordan was a "Rated Rookie." This is, for me, where Fun City Cards really took it to the next level ... of copyright infringement. How fast did Donruss sue Fun City? Three seconds? Four seconds? Or is this like a bootleg movie that there's really nothing you can do about except ignore? All I know is, I Googled "fun city cards" and nothing came up except an ebay link to this very card, which is going for $1 and has zero bids. That may not seem like a lot, but in Fun City houses only cost 75 cents and there are no property taxes and it's always happy hour and Michael Jordan plays every sport.

"Has there ever been less frills on the back of a card?"

Remember that George Brett Kraft Dinners card cut from the mac & cheese box that poor Canadian guy who grew up on the Airforce base in Germany collected? Those were relatively "no frills." Unless the random pattern of gray cardboard pulp pressed into flat sheets for the purpose of folding and gluing around dry noodles is "frilly."

Also, I want this Jordan card.

Excellent point, tourist504. At least Fun City went the route of whitening that cardboard, which probably cost a LOT of $$$. I would send you this card but I fear it may actually be worth something in a grand ironic/camp value sense one day. But again, you can always bid for it on ebay. Right now, you would be the only bidder. Those are good odds!

Thats pretty sick that Donruss actually took the time to convert basketball stats to baseball. Love the Blog btw I'm following check mine out http://truschoolsports.blogspot.com/ join the site if you like what you see.

I have two of these cards Topps and fleer....to bad they ain't worth nothing