Help Me Choose My Next Set: 1990s Edition

There's really nothing like collecting a new—or new to you—set. I'm just putting the finishing touches on 1988 Topps baseball (only six cards to go!) and now I'm itching to start another. I've got it narrowed down to two possibilities: 1991 Topps Stadium Club baseball or 1992-93 Topps Stadium Club basketball.

I never collected either when I was a kid; both were too expensive. Fast forward 25 years and you can still find unopened wax for under $20 a box (what an investment that turned out to be!). Here are the pros and cons of each set... 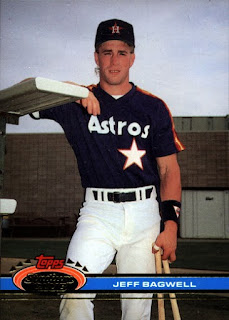 1991 Topps Stadium Club baseball
As Topps's first foray into super premium design and materials, 1991's TSC had an undeniably great design on both front and back. It was also the first Topps baseball product to be released in more than one series in 18 years (last multi-series Topps baseball set was in 1973). There was a card of Nolan Ryan wearing a tux. For no good reason. (Collection idea: Guys in tuxedoes. There are a ton of cards depicting players in formal wear, for some reason most of them produced in 1991.) The backs featured an inset of that player's Topps rookie card. This was especially great when that player's rookie card was his 1991 Topps Stadium Club card. My 12-year-old self really loved the crap out of this ripple in the spacetime continuum. The photography is fantastic, and with full-bleed photos without borders, getting a miscut card is a really big deal (no borders mean miscuts are obvious; an excellent prospect for miscut collectors like me).

There are few drawbacks to this set. Foremost are the head-scratching data splits on the card back. Second, because the cards are basically just 25-year-old color photos, the cards stick together. Also, there are only 600 cards in the whole set, which means the last of the scrubs won't have cards. Also, there are few rookies (Bagwell, Luis Gonzalez) and no Chipper Jones.

1992-93 Topps Stadium Club basketball
I only purchased two packs on these when I was a kid, since packs were insanely expensive. Now you can buy a jumbo box of series two for $40. The photography is exquisite. The backs feature "rookie cards," which is self-defeating, since Topps did not create basketball cards from 1983 to 1991. Conversely, the actual rookies in series two are great, as the 1992 draft was hobby-defining for the 1990s: Shaq, Alonzo Mourning, Christian Laettner, Jimmy Jackson, Harold Miner, Walt Williams; even Latrell Sprewell. The checklist is robust at 400 total cards, which is especially deep for a pre-Toronto/Vancouver NBA expansion set.

And series two featured the ridiculous "Beam Team" insert, which was meant to highlight a laser-light extravaganza shown at halftimes of select NBA games and instead became the hottest insert of the early 1990s. Man, how I wanted those cards! And I don't think I ever even actually saw one in real life, just in Beckett.

The drawbacks are similar to those of the baseball set: clumped card stock, data points that make no sense to little kids, and the aforementioned non-rookie rookie cards.

I imagine those fabricated rookies on the back of 1992-93 Stadium Club, presumably created to keep the integrity of the Stadium Club concept intact in spite of Topps opting out of basketball for six or seven seasons, directly led to the 1993-94 Archives set with all the "lost" rookie cards. (A set that as a fan of custom cards and photo stock I must admit I love, however artificial the concept!)

The problem of cards sticking together is a big one, as I hate the feeling of peeling cards apart and having them leave bits of themselves behind. I wound up voting for the basketball set mostly because of Shaq, Zo, Beam Team, and the probably more comprehensive checklist. I was almost exclusively a basketball card collector during the 90's, so those cards are nearer to my heart than the baseball equivalent. I didn't own many of them because they were expensive, but I saw them around.

What are the last cards needed for that 1988 Topps set? I voted for the baseball, I'm currently building that 91 TSC set myself. email me jfmjr1 at aol dot com

Baseball almost always gets my vote!

As someone who's had to deal with cards from the '90s sticking together a lot, is there a door number three?

I need to stop getting cards.

Baseball = Easiest decision I made all day. I absolutely love that set.