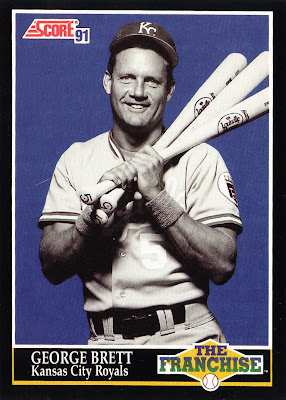 A lot of people ask me, "Mike, is George Brett a good person?" And I will say, "Well, I don't really know. Because I don't really know George Brett, like, at all. I just make fun of my old baseball cards on the Internet. I don't actually know any players." Then the person will say, "Oh. That's pretty dumb." Then I will say, "I DO know that George Brett is extremely tan for a person who lives in Kansas City, from what I have seen on television," but by that point the person has already walked away.

This much we know for sure: George Brett is indeed The Franchise and he can also hold up to three baseball bats at the same time without falling down. But IS he a good person? Hmmm ... let's try and find out. 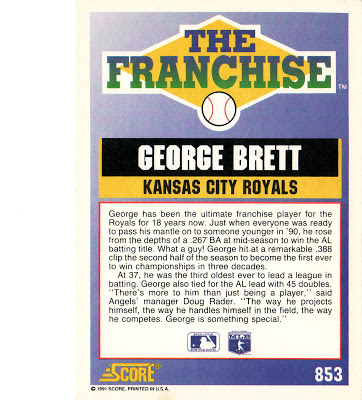 George has been the ultimate franchise player for the Royals for 18 years now. Just when everyone was ready to pass the mantle on to someone younger in '90,

I remember in 1990 thinking, "When are the Kansas City Royals going to metaphorically pass the mantle of 'franchise player' down to someone younger than George Brett? George Brett is pretty freakin' old, and other players are younger than him and also Bo Jackson. Maybe if I keep watching television this will happen, and I won't miss the ceremony ... "

(Note: BA stands for "batting average," a.k.a. the most important statistic ever. "A.k.a." stands for "also known as," which I didn't have time to write out completely earlier.) I didn't want to say this, but what a jerk for having such a crappy batting average at one point in time. Is he TRYING to hurt the team? That's not really the kind of personality I want from my "franchise player," someone who is such a jerky jerk that he can't hit the ball more often.

at midseason to win the AL batting title.

Wowzers. I wish there was an adequate phrase that captured exactly how I feel at this very moment, other than "wowzers."

What a guy, indeed! I don't think anything speaks to George Brett's character better than the fact that in 1990 he had a poor batting average before ending up with the best batting average. He probably started hitting better because he went to the hospital everyday to visit old people and maybe he also went to Africa and did some stuff there, too. "What a guy!" is something I like to say when someone (a guy) does something awesome that reveals his true personality. I haven't said it non-sacrastically in two decades, but nevertheless!
One more time with feeling!

You know what? Just for confirmation, let's ask the opinion of someone who really knows George Brett -- Angels' Manager Doug Rader.

"There's more to him than just being a player," said Angels' manager Doug Rader.

Impossible! All baseball players are just players and not actual human beings with emotions or thoughts that exist outside the realm of baseball! What is this jerk even talking about?

"The way he projects himself, the way he handles himself in the field, the way he competes, George is something special."

I don't want to editorialize here, but I think part of the reason the Royals were so hesitant to pass down The Franchise player mantle was because no other player handled himself in the field the way George Brett did. Like the way he stood on it and handled himself. In fact, the mantle itself is literally a statue of George Brett handling himself in the field. It's kind of gross, which is probably why no one else wants it.