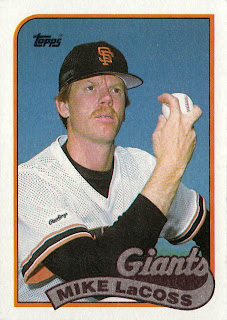 Hey, I’m Mike LaCoss! Check out my FORKBALL! Or split-fingered fastball, or curveball, or whatever! I don’t really like to classify my pitches. The point is -- my forkball does crazy stuff! It’ll bend your KNEES! I like to throw it when I’m angry, like when a batter tries to call timeout because I’m taking too long to decide which kind of forkball I want to throw! Arrrrgh! I hate that! But that’s when I’ll hit you off with the ol’ forky and you’ll be sorry you ever wasted Mike LaCoss’ time! How much you wanna bet I can throw this forkball over them mountains?! One time I threw my forkball so hard that it split into four baseballs and I ended up striking out a guy in France! I didn’t find out until three weeks later when the guy sent me a letter and all it said was “Nice forkball!” At least that’s what I think it said because I don’t read French! FREEDOM fries! 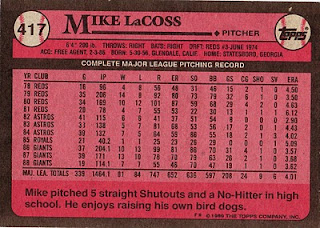 Mike pitched 5 straight Shutouts and a No-Hitter in high school.

Remember high school, dork?! I probably struck you out like, a zillion times! My forkball wasn’t even refined then! I didn’t care –- I threw it anyway! Watch out, here it comes! Psyche! Scared ya’, didn’t I? I throw my forkball during sex! Sex with women!

He enjoys raising his own bird dogs.

Another thing I like to do is raise my own bird dogs! Not other peoples’ bird dogs -– my own bird dogs! If you have a bird dog and you think I’m gonna raise it for you, well –- you got another thing coming, buddy! I raise ‘em from birth, and teach how to hunt, and catch birds, and then they kill ‘em! Yeah! Stupid birds, squeaking and quacking all the time! Shutup! I’ll sick my bird dogs on ya’, you stupid birds! And I raise ‘em right! A buddy of mine said he liked to raise his own bird dogs too, and then one day I was hanging out with him, drinking some moonshine and talking about mustaches, and a bird flew by, and his bird dog just sat there! I was like, “What kind of a bird dog are you?!” My bird dogs would’ve eaten, digested, and pooped that bird out before his dumb dog even realized there was a bird in the area! Arrrgh! I hate when other people say they raise their own bird dogs but really don’t! One time we were supposed to play the Cardinals and my bird dogs ate the entire team before the game started! I was like, “Ooops!” But not really! Sometimes I play fetch with my bird dogs by throwing them my FORKBALL! They catch my forkball better than my own stupid catcher! And he’s a person! Last year my stupid catcher let one of my forkballs get past him and the winning run scored! I was like, “You iiiiiiiidiot!” Then I gave him a real stern look, like this, and I threatened to throw my forkball in his freakin’ face! And he was like, “Cool, that should mean it’ll hit near my feet!” And I was like, “Arrrgh!” And I went to hit him, but I missed, and then he punched me in the face, and I fell down. But then he helped me back up. We're cool now. I mean, that’s my catcher.

Sounds like Mr. LaCoss has some kind of baseball Tourette's.

This would make a killer sequel to ICP's songs about stabbing.

This is one of the funniest things I've read in a long time. I totally remember this card, too

Would you believe a #5 Mike LaCoss arrived in my mailbox THIS VERY DAY? Good taste demanded I write a tribute to your excellent post.

Your blogs never cease to crack me up. Till the next!

Thanks for the positive comments, guys! And Matt, thanks for the blog nod. I just made that phrase up...does it work? No? Whatever.

I generally find Mike's post to be hilarious... this one had me in tears. Good stuff!

THIS is why I wanted Mike Kenny to contribute to The Baseball Card Blog!