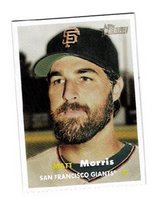 Back in the Eighties, it seemed like everybody and their brother had a beard (except for Pascual and Melido Perez, but more on them some other time). Today, I can name famously bearded ballplayers on one finger: Johnny Damon, and now even he’s been famously de-bearded. So that’s why it’s refreshing to see Matt Morris give the clean-shaven world the old f-you on his 2006 Topps Heritage card. What makes it even better is it’s his first card as a San Francisco Giant, so it’s almost like he signed the new contract over the winter, then grew a beard and started life fresh in a new city (I know he had a beard before he became a Giant, but go with me on this one). The only thing he’s missing in this photo is a pair of sunglasses.

Really, Morris is like the high school jock from the Midwest who moves to the bright lights of the West Coast, buys an old paperback copy of Naked Lunch and transforms himself overnight into a bohemian. The next thing you know he’s going to be seen hanging out upstairs at City Lights, eating hummus wraps on Columbus in North Beach and generally unnerving his teammates by inviting them to avant-garde Jean Genet festivals in the Castro, calling up Scott Rolen in the middle of the night and holding the phone to his hi-fi as the end of Caroline No plays on the turntable, and writing and performing confrontational slam poetry at cafes around the city.

What else does the future hold? Probably black turtlenecks, boot-cut blue jeans, lounging on throw pillows with the Coppolas, smoking clove cigarettes and turning on and dropping out. Because it certainly doesn’t involve playing competitive baseball games.