It’s not every day that you get a card of a minor leaguer, and frankly, after spending a childhood of reading the SCD Standard Catalog every night before I went to bed, I knew that I’d never be able to afford the team-issued sets of the Rochester Red Wings with Cal Ripken and the Pawtucket Red Sox with Wade Boggs or even the Bellingham Mariners with Ken Griffey, Jr. or the Modesto A’s with Canseco and McGwire. 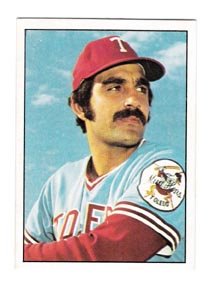 So imagine my surprise at opening dollar grab bags at the local shows at the Watertown Mall and finding multiple cards of the Toledo Mud Hens, not just another minor league team, but one of the oldest in the country, one of the oldest in the history of organized baseball. Sure this one is of Larry Cox, and it’s not worth a penny, but it’s a minor league card! In a set that included major league cards! Do you know how cool that was to a little kid? I still think that’s awesome today.

On a related note, there’s a used clothing store in the Midwest called Ragstock where sometimes you can find used Japanese baseball uniforms. I would sort of half-expect to find one of these Toledo jerseys in there too. It wouldn’t be out of place. It’s cool in an ugly-is-hip retro kind of way.

I admit I haven't looked lately but is the Bellingham Mariners set with Ken Griffey Jr still that pricey. Given his recent history I wouldn't have thought so. I remember buying that set brand new at my first card show in Vancouver.