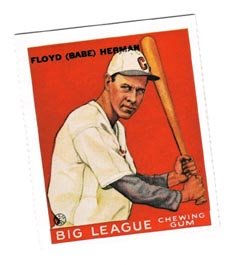 There a number of things that I know I’ll never have enough disposable income to afford. Right near the top of the list are old baseball cards. Now, I’m a big fan of buying older cards in lousy condition and then loving them as if they were mint, but if I was going to buy a 1934 Goudey card of even someone so minor as Babe Herman, I’d want it in pretty damn good condition. Call me a snob, I don’t care.

That said, there’s nothing better than forking over $6 or something for the book of Dover reprints, because not only do you get all of these famous cards in pretty good condition, you also get them with those ridiculous perforation bumps along the edges (usually a telltale sign if a card’s a Dover is if it’s got perforation bumps). For reprints, they’re great: unnaturally glossy front, white, readable backs, sharp colors (if sometimes a little off) and a nice variety of different sets completely out of my financial reach. 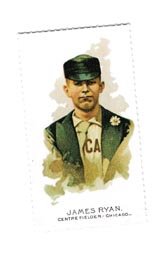 Dover reprints also bring up the fun, slightly philosophical idea of ‘fake’ cards. Card snobs could make a case that a reprint is a fake card, in that because it’s not 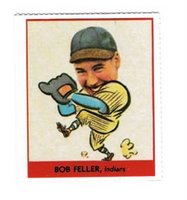 the real, first original print, it’s not as good and doesn’t deserve a place amongst other cards. I don’t really agree with this argument, because I happen to like the idea of reprints, and Dover reprints are really pretty good.

I totally agree about the Dover card reprint books. I've been collecting cards for 40 years (since I was in grade school), and started collecting reprints in the 80's because I got disgusted with the dealers and speculators who turned a hobby into a business.

While I've bought every reprint set available (check the Fritsch cards website for those), I think the Dover books are a great way to introduce people on a budget to vintage cards. The quality of the Dover reprints are not up to the complete sets you can get through Fristch, but for cost-conscious people, Dover is the better deal.

Dover now only sells three of the six books they've published, but you can't go wrong spending $12 on the Classic Baseball Cards and Hall of Fame Baseball Cards books. That's a VERY small investment for reprints of almost 200 cards going back to the 19th Century.