You know that shoebox of old family photos stashed down in the basement that you find by accident (when really you were trying to get a lightbulb or a box of trashbags or whatever you keep down in the basement), and go through and can’t help smiling and reminiscing? We all have a box like that, or a ziplock baggie like that, or an album or a wallet full of photos, and there’s always one or two that are included just because they’re funny or embarrassing. You know that no one outside of your family will ever see them (unless you’re the Trachtenburg Family Slideshow Players). Judging from my collection of baseball cards, trading card company editors are just like you, except that when they find an embarrassing photo, they rub their hands together with glee and release them out there for the whole world to see. Here are a few I found this evening.

Oquendo, Who Art Thou?

I would bet that not only can Jose Oquendo play every position, but he’s an accomplished musician, can prepare a five course meal for dignitaries and day care attendees alike, and has performed the Mikado in the royal courts across Europe and the Far East. Yeah, well, probably not, but he does look like Trekkie Monster from Avenue Q. And that’s something you can’t learn at a fancy school—that’s something you’re born with. 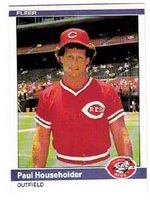 I’m going to put out a theory that I know nobody has put out in the open yet: Alan Knicely and Paul Householder were, on one afternoon in the spring of 1983, the same person. It’s pretty obvious how the über-Red pulled it off. First he had his photo taken as ‘Paul Householder,’ but then after standing out in the hot sun all afternoon for the three card companies and various other hangers-on, he went in to the clubhouse to get a beer (or probably not a beer, what with Marge and Schottzie running the show, 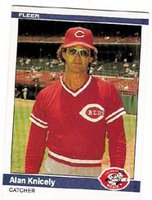 so let me rephrase that: he went in to the clubhouse to get an Ovaltine and to sign an oath of loyalty to give Schottzie his seat on the team’s short-distance traveling bus and on longer-distance flights) and while he was in the clubhouse, he heard the payphone in the tunnel ringing and went out to answer it and when he did it was some guy named ‘Alan Knicely’ who told Householder that he wasn’t gonna sign no goddamn loyalty oath to give his seat to no goddamn dog and that he wasn’t gonna be able to make it to the park. And then Knicely abruptly hung up and, because Householder didn’t know what Knicely looked like, and because he had seen the photographers’ player checklists out on the field, he donned a pair of flashy early-era Chris Sabo glasses, pulled his hat down low, put on a red long-sleever and ran back up the tunnel to pose and smirk his way into history as Alan Knicely.

Only Genghis Calls Me ‘Junior’ 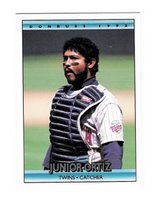 I also would bet that Junior Ortiz, Twins catcher circa early 1990s, could’ve held his own on the western plains of medieval China. Take a look at this card. Now close your eyes. Have your friend read these next few lines to you (because your eyes are closed):

You’re standing in a field on the outskirts of your village, the wind whipping the patchwork strands of the yellow, green and brown wild grass this way and that and when you look to the clouds collecting on the lower summits of the range in the distance, you can in your knees feel the moisture in the air. A small child runs up to you just at the same moment that a solitary figure appears on the horizon, galloping towards you at a breakneck speed. You can’t hear the horse yet, but it’s sound is as familiar as your wife’s footstep, her sigh, her yelling at you to move your ass and change the channel, but it’s 1344 and you won’t know what the hell she’s talking about for another six hundred odd years…anyway, back to the horse. Just at its sight you turn and collect the child, your heartbeat collects in your throat and you run for the safety of the village, and if not that, then to collect your wife and make for the hills. You’ve seen the wrath of the man on horseback before, the one in the padding and with the eye-black, the one they call ‘The Catcher.’ Nobody calls him Junior to his face, because those who do end up without one…

Speaking of Guys Hanging Out By Themselves 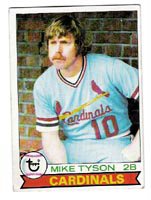 If you were a relatively regionally famous baseball player in the Seventies and Eighties, how much would it suck to be named Mike Tyson? I mean, in this photo, Tyson looks pretty bad-ass, what with the brick wall and the crazy hat-head hair and the obvious chaw in his cheek and his eyes focused either in deep ‘I’m gonna whup John Denny’s ass’ psycho mode or ‘Maybe Garry Templeton will outshine me’ contemplation mode.

His is a timeless bad-ass look: he’s one of the few who wouldn’t look any less psychotic in a bowler and suspenders, white shirt and bare knuckles than he would in a baby blue jumpsuit speckled with birds teetering on a baseball bat.

Anyway, all I’m saying is that if for some reason Don King was hard up for cash and needed to resurrect Iron Mike for a reunion tour or something, he probably could coax Brick Mike here into a doubleheader against someone equally weird, like Greg Luzinski or Roy Lee Jackson. Hell, if King really wanted to pack ’em into high school auditoriums across the country, he could make it a three-bout card, with Jerry Mumphrey taking on arch-nemesis Terry Humphrey.

Sometimes, just by looking at the picture, you can tell that either the photographer forgot a player until the last minute or, as is the case here, it was written into the standard baseball card company photographer’s handbook that one should never ever approach Gaylord Perry when he’s relaxing in the bullpen with a baseball bat across his lap. You never know what might happen, especially if someone calls him Herman Munster to his face. 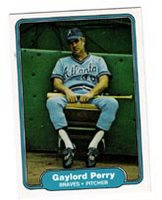 It’s sad, really. Here’s one of the best long-term, long-haul pitchers of his generation who was consistently robbed of great baseball cards because photographers had a way of making his head look elongated like Fred Gwynne. It’s the same reason why Kevin McHale never really had any close-ups taken: they’re just not good-looking individuals. Especially in this case: after a career full of bad card photos, it was probably best to get a shot of him waiting to knock the crap out of an unsuspecting passer-by.