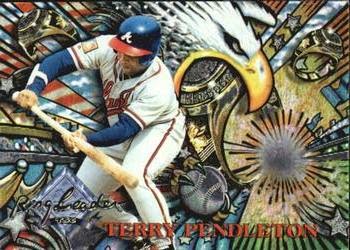 Stadium Club CEO, Hank Freck: Gentlemen, today is the first day of the rest of our baseball card lives. Today we begin designing the Ring Leaders series that is going to set the world on fire.

Hank Freck: I want no expense spared, and I want no wasted space. Whoever said "less is more" is a stupid dumbass.

Bill: Sir, didn't you say "less is more" when you started the comp-

Hank Freck: Listen up, everyone. I've been doing a lot of thinking, and I want this set to include as much stuff as possible. We're gonna stuff the hell out of this [extended expletive]. Nothing is off limits. Think about everything you know about rings, and hit me with it.

Hank Freck: Awesome, good start. That is something rings definitely do. Barb - write this stuff down. Anyone else?

Gary: How about an explosion?

Hank Freck: Explosions are good. Done and done. Gary, you just exploded yourself into a raise.

Hank Freck: For crying out loud, Phil ... you're a genius. THIS IS AMERICA.

Phil: And maybe the bald eagle is like, eating a giant ring?

Phil: And like, holding a baseball with its bird claws or something?

Phil: AND THE BIRD IS POOPING ON HOCKEY BECAUSE HOCKEY SUCKS.

Hank Freck: Okay, sit down, Phil. Too far. You always go too far. Anyone else?

Bart: How about stars?

Hank Freck: Sure, why not. You can't have a ring without stars. That's just science. Oh and BY THE WAY, I don't want some professional "artist" (does air quotes) designing this thing. I want a real baseball fan, like, hey - Hank Jr., you up for this?

Hank Freck: Was that a suggestion, Dave, or do you have Tourette's?

Hank Freck: Charles, can we fit spaghetti and meatballs on this thing?

Hank Freck: Dammit. Okay, well let's turn our attention to the back. So uh, what do baseball players win rings for? I literally have no idea. 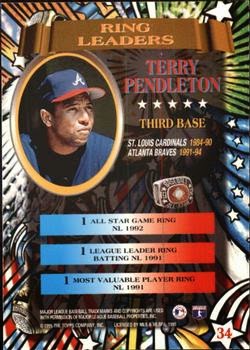 Fred: All-Star games? Do they get rings for that?

Dave: Of course there's the famous batting title ring. That I know for sure.

Hank Freck: Makes sense. What about a bunting ring? Is there a ring for like, best bunter?

Hank Freck: Okay well let's play it safe then, and if a Ring Leader is also a good bunter, just feature him bunting while the bald eagle eats a giant ring behind him.

Charles: Guys, what about World Series rings? Are you gonna account for those?

Hank Freck: Uhhh, pretty sure they get hats for that, Charles. (under breath) Idiot.

I think you failed to discover the true mission of that baseball card. It's a secret message to the agents of the Illuminati. Someone will be visiting you, soon...

It clearly says Hank Freck, but all I hear is Cave Johnson. We're done here.