The Most Boring Card Ever Made

When I thought about writing about the most boring card ever made by human hands, I immediately thought about a SSPC card of Larry Milbourne of the Astros. But then I realized that the card isn’t necessarily boring; it’s Milbourne who’s bored with us. And who can blame him? Have you ever taken anyone seriously in an orange helmet? And by the way, what’s he eating? 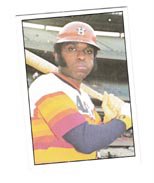 So then I came across this next card of Jesus Figueroa, and I don’t know what’s more unfortunate: the fact that Figueroa was only in the big leagues for one season, or that he was honored with the most boring baseball card ever. Nowadays, what with card companies totally beyond obsessed with every rookie since the kid’s in grade school, a guy like Figueroa would end up with thirty cards or something before he ever even saw the men’s room in Fenway Park. So let’s say he’s supposed to be the next great Cub outfielder and his face even bears a weird resemblance to Billy Williams, but it turns out he lumbers around the outfield like Don Baylor in a motorized wheelchair at the beach—well, at least his kids would be able to save more than one card of him. 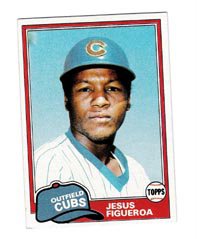 And let’s say he’s a philandering baseball player on the road (though he looks like a nice guy, if a little shell-shocked, like he’s not entirely sure what he’s supposed to do when he gets his picture taken) and has many children in different cities, like a baseball version of Screamin’ Jay Hawkins; then those baby mamas could raise their children to despise Jesus without having to explain why, and one of his enterprising, although illegitimate children, could buy an authentically autographed Jesus Figueroa 1 of 1 from the local card shop or hobby show at the La Quinta Inn down by the highway, learn the signature by heart and, because the child would certainly look like his or her father, try to pass themselves off as him, max out his credit cards and make him come down from the hills, where for the last fifteen years had been writing best-selling novels thought in some circles to be on par with American Literature’s greatest recluse, JD Salinger. You know, just to get back at him for only loving their mother for less than one night.

Local news would have a field day, and if it happened in New York City, the Post could run a headline like ‘It Was In The Cards’ or something equally inane, and that headline writer’s boss would stop by his desk the next morning and say, “You know, Ed, that the best you can do? Not so great, Ed. Not so great.” And then that headline writer would spin back around in his chair, silently curse his boss and blow off doing work for another forty minutes, instead reading a new blog about baseball cards. The headline writer would then curse himself for not finding the blog before having to write that goddamn stupid headline about another poor sap with a famous, if reclusive, parent who just can’t get a break. So I guess Figueroa’s situation isn’t quite as bleak as I thought. He’s only got one card, and it’s the most boring card ever created: no autograph, no facial hair, no action, no arms. No nothing.

Mike Proly, 1982 Fleer Okay, so we know that the photo’s out of focus, but that’s not what make’s this card so fantastic. It’s the fact that it looks like Proly decided to go as a Phillie for Halloween, like he bought one of those horrible corduroy hats and put some electrical tape down the side of his Jordache jeans and then topped it off with a belt. I also like that he’s holding his crotch in this picture. Classy.

Derrel Thomas, 1978 Topps Gotta feel bad for Thomas. Can’t even really explain why; might be the glasses, might be the fact that it’s obvious he desperately wants to look bad-ass but just doesn’t because of the aforementioned glasses. Also, it’s hard to tell if there’s even glass in the left lens, 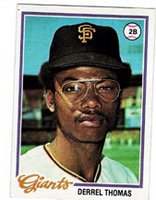 which might explain why the glasses tilt on the right temple. He looks angry. The I-would-kill-your-dog-and-eat-him-in-front-of-you-if-it-weren’t-for-these-glasses-I-found-in-a-box-of-children’s-dressup-clothes-at-a-yard-sale-which-I-got-at-a-good-price-by-the-way kind of angry that you just can’t take seriously.

Harry Spilman, 1986 Topps Who is it that Spilman is talking to, anyway? Either the guy messed up and wore the Astros’ away jersey or is a member of the other team. Wait a minute, I just figured it out. It’s Craig Reynolds. Can an Astros fan explain to me why Craig Reynolds is wearing a blue uniform? Also, I would like an Astros fan to explain the mystery of Harry Spilman to me. I always thought he was some kind of drifter with those corn nibblet teeth, 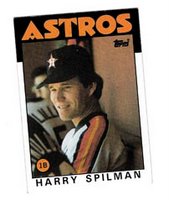 like he was incapable of running, like he had the rheumatism and always had to sit on the bench, like when he rode the boxcars across Oklahoma. But then again, this is the only card of him I remembered ever having. And can someone explain why he deserves a baseball card? Is the theory that Topps, Fleer and Donruss just needed filler for their sets? If I were still actively collecting cards, I would pissed at getting a player like Spilman in my pack. I remember getting pissed every time I would get a Carlos Quintana in a pack of 1989 Donruss, and I’m a lifelong Red Sox fan, and I was paying something like 50 cents for a pack of those. I can’t imagine paying two or three dollars a pack and getting a benchwarmer in my pack. Or worse, an unproven rookie shown in his Starbucks barista uniform because he’s still in high school. That would suck.

So here’s to you, Jesus Figueroa.

You, sir, have the best blog ever. You may actually force me to get out the boxes and boxes of cards I haven't opened since 1992 if you're not careful.

Great stuff, keep it up, I really enjoy it. I originally came to read about old baseball cards, but stayed because of the writing. You have a talent for that. Best of luck with the future.

You gotta stop this man...I'm laughing out loud at work. Not good for my career prospects.

Love this site. About a month ago, several Twins players came to my town. The group included Ron Gardenhire and Rick Anderson. I knew that Gardy had cards in '82 and '83 and Anderson in '87. I had so much fun looking through the cards I have from 1980-1986. What a walk down memory lane! And now, a blog related to this is just wonderful!
Thank you!

Can you do a comparison of all the suspected roid users rookie cards versus what they looked like at the peak of thier juiceness?

Craig Reynolds is a wearing a batting practice jersey. The Astros used to have navy blue BP jerseys back iin the day.

Great topic about "most boring card ever". And is it just me, or does Harry Spilman look a little like Mark Wahlberg in that '86 Topps card?

At least Jesus Figueroa is getting some attention--in reality he is a cool guy. Jesus has been the BP pitcher for the Blue Jays since 1989 and is considered one of the best in the business.

It is time for TOPPS to give him a new card as a BP Pitching legend!

I'm not a home right now - but I have card of Deon Sanders, just sitting on the bench, with the most borring look on his face... I know for a fact that card belongs in this "borring" card collection of un excited baseball pros...

yours is an awesome site...I'm going to go through those two boxes of "questionable" cards in my basement right now...I may have some gems in there

Oh, and check out my blog:
http://kurtbenbenek.blogspot.com
It's TOPPS!!!